Until the Middle Ages, the history of Portugal is inseparable from Spanish history. The region that today is Portugal became part of the Roman province of Lusitania in the 2nd century BC In the 5th century control of the region passed to the Visigoths, who would maintain their power until the 8th century, when the Iberian peninsula was occupied by Muslims. In 997, the territory between the rivers Douro and Minho (present-day northern Portugal) was conquered by Bermudo II, king of León, and in 1064 Fernando I, king of Castile and León, took the reconquest to the area where it now stands the city of Coimbra. The reconquered districts were organized as feudal counties submitted to the king of Castile and León. The name of Portugal is derived from the northernmost feud, the Comitatus Portucalensis, which extended around the ancient Roman port of Portus Cale, the current Porto. In 1093 Enrique de Borgonha (died 1112) helped Castile in his project of reconquest. In gratitude for his services, Alfonso VI of Castile appointed Enrique count of Portugal. After the death of Alfonso VI in 1109, Count Enrique (and later his widow, Teresa), refused to maintain the dependence in relation to Castile and Leon. León invaded and started a series of wars, all of small transcendence. In 1128 his son, Afonso Henriques (the future Afonso I), rebelled against his mother. The Portuguese knights accepted Afonso as king in 1143 and in 1179 the pope recognized the independence of Portugal.

1. The medieval kingdom of Portugal

Afonso I, with the help of the Templars and other military orders, extended the limits of the new kingdom towards the south of the Tagus River. His son Sancho I (1185-1211) encouraged Christians to repopulate the reconquered area where self-governing municipalities were established. Cistercian monks played an outstanding role, whose restocking promoted an increase in agricultural production. At the end of the 12th century, the Almohads, a Muslim dynasty in North Africa, temporarily halted the advance of Christians towards the south, but after their defeat in the battle of the Navas de Tolosa (1212), the reconquest continued. King Afonso III (1248-1279) completed the expulsion of Muslims from the Algarve and moved the capital of Coimbra to Lisbon. The new form of government also started with the help of the Cortes (representative assembly that included members of the nobility, clergy and citizens) and increased the power of the monarchy at the expense of the Church. His son Dinis, Liberal, promoted agriculture, founded the nation’s first university, in Coimbra, and was responsible for the development of the Portuguese fleet. In 1294 he signed a trade treaty with England, which was the beginning of a series of alliances between the two countries. Dinis’s successor, Afonso IV, joined Alfonso XI of Castile to achieve victory over Muslims in the battle of the Salado River in 1340. During this period, marriages between members of the royal houses of Castile and Portugal were frequent, opening up the possibility that both kingdoms could come together.

After the death of Fernando I, the last of the legitimate descendants of Enrique de Borgonha, his illegitimate brother Dom João I (1383-1433) assumed the Portuguese throne in 1385, after two years of civil war, and gave rise to the Avis dynasty. Dom João I’s reign was one of the most notable in the history of Portugal. He consolidated Portuguese independence after defeating Castile in the battle of Aljubarrota (1385). In 1386, England and Portugal were permanently allied in the Treaty of Windsor. Another relevant fact of Dom João I’s reign was the beginning of Portuguese maritime explorations, which began under the guidance of his son Infante Dom Enrique o Navegante, prince of Portugal, who explored the African coast in search of a route to the Indies. A century of exploration and conquest began that made Portugal one of the greatest colonial powers in the world and allowed the development of the mercantile bourgeoisie. Between 1418 and 1419 Portuguese navigators explored the island of Madeira and in 1427 they discovered the archipelago of the Azores. In Morocco, an important military campaign takes place that ended the occupation of Ceuta in 1415.

2. The era of Portuguese expansion

According to petsinclude, the island of Madeira and the Azores quickly became important centers for sugar production, and the conquest of Ceuta gave Portugal a strategic enclave in North Africa, which would serve as a base for future explorations of the African coast. Using the caravel (a new type of light vessel specially adapted for voyages across the Atlantic), Portuguese sailors sailed further south from Cape Verde in 1444 and, around 1460, reached Sierra Leone. Meanwhile, Dom João I’s successors, King Duarte I (or Eduardo I, 1433-1438) and Afonso V, sent expeditions to Morocco and took the cities of Tangier and Arzila (Asilah).

King Dom João II (1481-1495) reestablished the monarchy’s prestige by subjecting the turbulent nobles to his authority. Abroad, he founded (1482) a Portuguese fort in Elmina (present-day Ghana) and established relations with the kingdom of Congo (currently Angola). Between the years 1487 and 1488, Bartolomeu Dias became the first navigator to bypass the southern tip of Africa and opened a marine route to the East. After the discovery of America by Christopher Columbus in 1492, Portugal and Spain signed the Treaty of Tordesillas (1494) which granted Portugal all the land discovered east of a line 370 leagues west of the islands of Cape Verde (see demarcation line ). 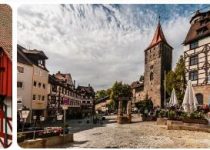