The president is head of state and decides on the country’s domestic and foreign policy. They are responsible for the country in matters of defense and security. However, through the 2017 constitutional changes, socio-economic issues passed from the president to the government. The president is elected in general elections for a term of five years and may be re-elected.

The government is responsible to the president and parliament. The President appoints the Foreign, Defense and Home Affairs Ministers as well as the Prime Minister, who in turn appoints other members of government in consultation with Parliament and the President.

According to the constitutional amendments of 2017, the president can no longer issue laws via decrees, no longer appoint or dismiss ministers, or overrule a declaration of confidence by Parliament against a minister. Nor can the president cancel government decisions.

In reality, since Kazakhstan’s independence from the Soviet Union in 1991, power has been strongly linked to the president: until the spring of 2019 Nursultan Nazarbayev, then Kasym-Tjomart Tokayev. In 2019, Tokayev transferred some of his powers to Nazarbayev, whose family has great influence over all areas of society.

The legislative parliament (kines) has two chambers. The People’s Assembly (the lower house, the mažilis) consists of 107 members, 98 of whom are elected in general proportional elections every five years. The remaining nine are appointed by a body representing all the country’s ethnic groups (see below). Candidates for the eligible seats must be on party lists.

In order to get into the masjilis, a party must get at least seven percent of the vote. Since Nazarbayev’s party won all the votes in the 2007 elections, a change was made in the electoral law: from the 2012 elections, the second largest party is guaranteed a mandate, even if it falls under the ballot. The voting age is 18 years.

The Kazakh People’s Assembly, formed in 1995, is a body representing the country’s approximately 120 different ethnic groups. The 350 members are not elected to their posts, but they have the right to elect Members of Parliament (see above).

Kazakhstan is divided into 14 counties (oblast) as well as the three metropolitan regions of Almaty, Nursultan (formerly Astana) and Sjymkent. Elections to regional parishes (maslikhat) are held every five years. The president appoints a governor (akim) for each county. He leads his own executive “government” (akimiyat), who is appointed by the president with the approval of the local assembly.

The party system is poorly developed, despite the fact that there are many political parties. Parties based on ethnicity or religion are prohibited by law. In order for a new party to be registered, it must have at least 50,000 members and be represented in all regions of the country.

Often, temporary alliances have been formed to pursue a particular issue. Many parties arise before an election but then disappear or merge with other parties. Loyalty exchanges mean that presidential politicians have formed opposition parties and opposition parties have become presidential. It is difficult to discern any clear ideological divides.

The largest and most dominant party is the Light of the Fatherland (Nur Otan), who was Nazarbayev’s backing party during his nearly 30 years as president. Nazarbayev is still party chairman.

In addition to the Light of the Fatherland, there are two small parties in Parliament since the 2012 election: The Light Road (Ak Zjol, also called the Kazakh Democratic Party), and the People’s Communist Party (Qazaqstan Communistyk Chalyk Partijasy). In practice, both act mainly as support parties to the regime.

The Light Road was founded in 2002 and was initially seen as a genuine opposition party. It was formed by an outbreak of the opposition movement Kazakhstan’s democratic elections (Qazaqstannyn Demokratiyalyk Tandau, DCK with English abbreviation), which had been formed the year before after power struggles at the highest political level. In the background, there was a struggle within the political elite for control of finances and natural resources – not least the oil. Several of the founders of the movement who broke up with Nazarbayev were later charged with various crimes. One of them is the banker Mukhtar Adljazov, who is in exile. He was sentenced in 2018 in his absence to life imprisonment for murder.

DCK was dissolved by a court in 2005, citing illegal protests in connection with the 2004 parliamentary elections. Some of the members then formed Forward (Alga), but never managed to get the party registered by the authorities. It was banned in 2012. Party leader Vladimir Kozlov was sentenced in 2012 to 7.5 years in prison but was released in 2018.

The People’s Communist Party was formed in 2004 by an outbreak of the old Communist Party, which had been banned by independence but resurrected in 1998. The Communist Party has long dominated the opposition. It, together with Forward and several individual organizations, formed a new political grouping in 2011, the People’s Front. The collaboration led to the Communist Party being banned from running for the 2012 parliamentary elections.

A breakout group from The Bright Road formed in 2005 New Bright Road (Naghyz Ak Zjol), which later changed its name to Freedom (Azat). Freedom merged in 2009 with the National Social Democratic Party (Zjalpjulttyk Sotsial Demokratijalyk Partijasy, NSDP with abbreviation in English), formed a few years earlier under the leadership of the former Speaker of Parliament Zjarmachan Tujaqbaj. After the 2012 election, the collaboration fell apart. The NSDP is now considered the most “genuine” opposition party within Kazakhstan. 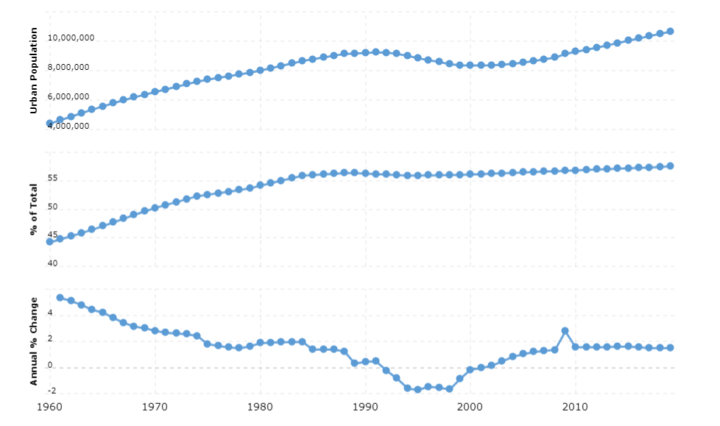 Opposition leader Galymzjan Zhakijanov is released on parole after two years in prison.