In Jordan, the king has great power, backed by the army and the security service. He also has support in Parliament, as the country is divided into constituencies in a way that favors the more royal countryside at the expense of the largely Palestinian urban population, where many are opposed to the king’s west-friendly politics. In protest against the electoral system and against promised reforms not going far enough, the largest political party, the Islamic Action Front (IAF), boycotted several elections. Radical Islamic parties are banned and most MPs are partyless.

Short for JO by Abbreviationfinder, Jordan is an hereditary monarchy and great power is concentrated on the royal family, who exercise control with the help of a loyal army and security service. The Jordanian Hashemite royal house is considered to originate from Prophet Muhammad, which gives it legitimacy in the eyes of many Jordanians. According to the 1952 constitution, the king is head of state and commander-in-chief. He has the executive power and has the right to declare war, make peace, call for and postpone elections and dissolve the legislative parliament.

The government, which is led by a prime minister, is responsible for the day-to-day administration. The king appoints and can dismiss the prime minister, who in turn appoints other ministers under the monarch’s supervision. Ahead of the January 2013 elections, the king promised to agree to the opposition’s demands and appoint a head of government in consultation with Parliament, which also happened.

The legislative power lies with Parliament, the National Assembly (majlis al-umma), which consists of a lower house (majlis al-nuwwab) and an upper house (majlis al-a’yan). Prior to the 2016 parliamentary elections, the electoral law was changed. The lower house now has 130 members, elected in general and proportional elections of up to four years. Fifteen places are reserved for women, nine for Christians and three for Cherks and Chechens in common. In the upper house there are 60 representatives appointed by the king for eight years. Half of the members of the upper house are replaced every four years. The voting age is 18 years.

Parliament’s task is to decide on legislative proposals from the government. If both chambers accept a proposal, it goes to the king for a ruling. If he says no to the bill, the matter should go back to the National Assembly, but there is a two-thirds majority needed to repeal the king’s veto.

In 2011–2012, a number of reforms were implemented, but not very far. Among other things, a constitutional court was introduced. A standalone electoral commission was set up, it was decided that the ministers could be demanded greater responsibility, and the time the king could rule without parliament was reduced from two years to four months. Prior to the 2013 parliamentary elections, some changes were also made; MPs are now elected in two electoral procedures: 123 members (15 of whom are women) are elected by majority vote, where voters have one vote regardless of how many candidates are to be elected in the constituency. The remaining 27 seats are added in national proportional elections, with each party being allocated seats by voting share. In addition, the King’s promise was to appoint the head of government in consultation with Parliament.

The amendments did not satisfy the opposition, which demanded that half of the seats be filled in national proportional elections. Many also demanded that the members of the House of Commons should be elected by universal suffrage and not, as today, directly by the King. It also wanted Parliament to have greater power over the king. Despite the reforms, and despite four additional mandates being allocated to the larger cities, the constituency still benefits the more royal rural population at the expense of the residents of the cities, where the vast majority of Palestinians and regime critics live. In 2015, a new electoral law was presented, which the king signed in March 2016.

Jordan is divided into twelve administrative areas (muhafazat). Local government is exercised in 152 city councils and 340 city councils. The local elections in 2007 took place in accordance with a new law which means that all mayors and members are elected in general elections every four years, except in the capital. There, as before, the mayor and half of the king’s council are appointed. The law also guarantees female candidates a fifth of the mandates in local parishes.

There are three types of courts: civil (general) courts, special courts, such as the military court and the state security court, as well as religious courts. The latter deal with family law cases and here are Sharia courts for cases involving Muslims and special tribunals for other religious groups.

In 1992, it was again allowed to form political parties after a 35-year ban. In 2007, however, the demands on the parties tightened, among other things, they had to be supported by 500 people from at least five of the country’s provinces, and about two-thirds of them were forced to cease.

The most important party is the Islamic Front of Action (Jabhat al-amal al-Islami, IAF), which is the political branch of the Islamic Movement Muslim Brotherhood originating in Egypt. IAF is the only movement that has more popular support, thanks in large part to grassroots charity work. It wants to form an Islamic state, admittedly with peaceful means, but there is some disagreement within the party about how to achieve the goal. In practice, the IAF has usually supported the royal power against various leftist groups, but the party boycotted the elections in both 2010 and 2013, when a majority considered that the democratic reforms promised by the king, mainly a fairer election system, did not go far enough and fast. The front has also drawn sharp criticism of the government’s Israeli policy and good relations with the United States. They also criticized King Abdullah’s open support for the military coup in Egypt in 2013, when the elected president Muhammad Mursi of the Muslim Brotherhood was overthrown from power. The government banned the Brotherhood in Jordan in 2016, but the IAF was allowed to stand in the parliamentary elections that year and after the changes in the electoral law, the party also decided to participate. The alliance that the IAF was involved in won 15 out of 130 mandates in the House of Commons. 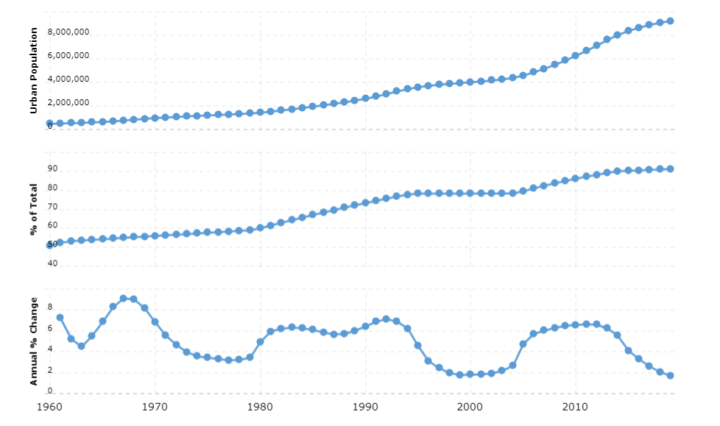