Since Japan was defeated in World War II, the occupying power was the US main goal to disarm and democratize the country. The 1947 Constitution therefore states that Japan should be a parliamentary democracy with fundamental freedoms and rights. The country will forever renounce war as a means of resolving intergovernmental conflicts. However, this pacifist constitution has been called into question during the 2010 century.

Since Japan was defeated in World War II, the occupying power was the US main goal to disarm and democratize the country. The Constitution of 1947 therefore states that Japan must be a parliamentary democracy, and that Japan must not have any military forces. The latter has long been interpreted as giving the country a defensive self-defense. But the pacifist constitution has been questioned and may change (see Foreign Policy and Defense). A new referendum law that came into force in 2010 could facilitate such a constitutional change. But there is strong popular support for pacifism, as the memory of the atomic bombings and the devastating fire bomb attacks at the end of the Second World War is still very much alive (see Modern History).

Short for JA by Abbreviationfinder, Japan is an imperial heritage monarchy, but the constitution states that the emperor does not have the right to political power or claim to divinity but merely represents the people and the state. The order of belief is male. Plans for a female throne were also shrunk in 2006 since Princess Kiko gave birth to a son (see Modern History).

As in Western democracies, power rests on three pillars: legislative, executive and judicial power. The highest state body is Parliament (diet or kokkii) with two chambers. The upper house (sangi-in) has 245 elected members after the 2019 election. The number will be increased to 248 after the 2022 election. The members will be appointed in six years. Every three years, half of the seats are elected. In the more powerful lower house (shugi-in) there are 465 members elected in four years (the number of seats was reduced by ten before the 2017 election). Almost two-thirds of them are added through personal choices in one-man election circles and the rest through proportional parties. In the upper house, 148 seats will be added by 2022 through individual elections and 100 through proportional elections.

Parliament appoints the Prime Minister, who then forms a government. All ministers must be civil and most of them must sit in parliament. In principle, all laws must be approved by both chambers, but the lower house can run through proposals that the upper house said no to if two-thirds of the members of the lower house vote in favor of the proposal in a second vote. The lower house can also accept or reject the budget and international treaties and put the government in the face of distrust without the approval of the upper house. All citizens who are 18 years of age have the right to vote and whoever wishes to run for the lower house must be 25 years of age. For elections to the upper house or governor posts, the minimum age is 30 years.

The state administration is formally subordinate to the government and parliament but can influence decisions and how the policy is formulated. Only Parliament can pass laws, but most legislative proposals are carefully prepared within the ministries concerned. The process becomes an interaction between senior officials and politicians, giving the bureaucracy greater power than in many other countries. Business also has political influence through personal relationships between business leaders and top politicians.

Administration and the judiciary

Administratively, Japan is divided into 47 prefectures. In 2009, the number of municipalities was reduced from just over 3,000 to 1,775.

Japan’s legal system is structured around courts on three levels. At the lowest level there are 50 district courts or district courts. Alongside these are family courts that handle civil cases (such as divorce and juvenile delinquency) and over 400 high speed courts that handle simpler cases. Judgments can be appealed to one of the eight court courts. The Tokyo Supreme Court is the final court and sets precedents for lower court rulings.

Japan has had a lot of parties since the Second World War, but the country has almost always been led by the conservative Liberal Democratic Party (Jiyu-Minshuto, LDP). Its power was broken in 2009 by the more liberally-minded Democratic Party (see Japan’s Democratic Party, DPJ, below). After the December 2012 election, however, LDP re-rules.

During the postwar period, Japan’s party flora was characterized by a large number of new formations, divisions and transformations. A number of parties have been formed and closed down, more often because of new personal configurations by politicians than for ideological reasons. Others have been aspirants who tried to capture an opinion, but who have since closed down. Japanese politics is also strongly influenced by local interests.

Another characteristic feature of Japanese party politics is that many leading politicians are descendants of former top politicians. Several of the last few decades of prime ministers have grown up in families where the father has also been head of government, or at least minister. Personal ties often play a greater role in politics than ideological positions.

After its creation in 1955, the Liberal Democratic Party (LDP) dominated politics for decades in close collaboration with major corporations and state bureaucracy – the so-called iron triangle. LDP, more a collection of conservative factions than a regular party, protects private enterprise, economic growth and cooperation with the United States.

The post-war leading opposition party was for a long time the Socialist Party (JSP), renamed the Social Democratic Party (Shakai Minshuto, SDP or SDPJ) in the 1990s. Government cooperation with LDP from 1994 caused the SDP to drop voters and shrink sharply. However, in 2009–2012 SDP was included in a coalition government led by DPJ.

The Communist Party (Nippon Kyosanto, JCP), founded in 1922, is Japan’s only yet existing party from the time before the Second World War. It has followed an independent line without allying with any foreign Communist Party. Still, JCP lost voters after the military massacre of Beijing opposition in 1989 and the fall of the Berlin Wall the same year.

New Komeito was formed in 1998 through a merger of Komeito and the New Peace Party. Both parties had roots in the original, Buddhist-rooted Komeito, founded in 1954 and long supported the LDP. Komeito was split in 1994 after participating in an alliance that in 1993 broke LDP’s long government holdings but fell apart the following year. Since the 1998 merger, New Komeito has been in alliance with the LDP.

In the 1990s, a number of new parties were born. In 1994, the New Progress Party (Shinshinto, NFP) was added and in 1996 the Democratic Party (Minshuto, DPJ) voted as a “third force” between the conservative LDP and the NFP. In 1998, defeated politicians from some other parties joined the DPJ, which grew rapidly and demanded, among other things, a greater spread of power and less bureaucracy. Since the dissolution of the NFP, the Liberal Party was formed (LP), which in 2003 merged with DPJ into a new party, also called the Democratic Party. After the 2009 parliamentary elections, the DPJ took over the government with the support of the SDP and several smaller parties. But three years later, the party ended up in opposition again. In the spring of 2016, however, the DPJ merged with two other smaller opposition parties as a way of building a united front against the government alliance. The party called itself the Democratic Party (Minshin To, DP).

But already in October 2017 before the election for diet, the party split. A majority of party members chose to stand in the election for the newly formed Hope Party (Kibo no To). This had been formed in October 2017 by Tokyo Governor Yuriko Koike, whose hopes of challenging the ruling LDP coalition in the House elections, however, were shattered. The more leftist former DPJ members chose instead to form a new party, the Constitutional Democratic Party (CDP).

The Sunrise Party was formed in 2010 by some nationalist outcasts from the LDP, with Tokyo’s then Governor Shintaro Ishihara as one of the leaders. Ahead of the 2012 House elections, the party merged with Japan’s right-wing populist reconstruction and innovation party (Nippon Ishin no Kai), where Ishihara was also a top name as was Osaka Mayor Toru Hashimoto. The party received a full 54 seats in the lower house in the 2012 election, but backed to only 11 seats five years later. 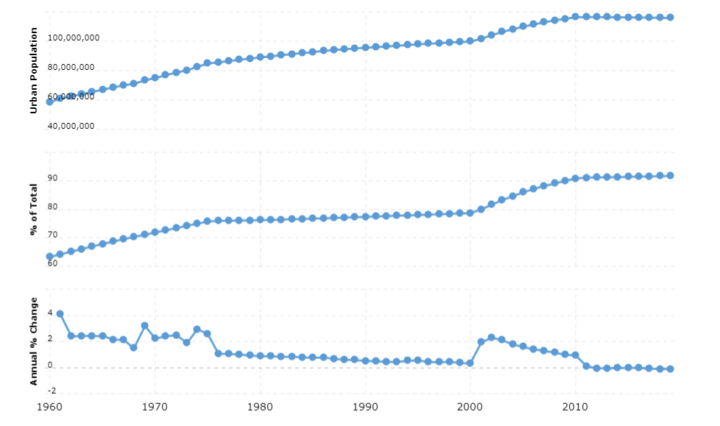